Indecision is not something that I tend to struggle with, except for in one aspect of my life: therapy. You all saw that coming, right? The therapeutic relationship and therapy is something I second guess myself about ALL THE TIME! I have a running internal monologue when I think (obsess) about therapy: Should I say this? What would happen if I do that? What will she think if I…? If I ask her for ‘x’ will she ‘y’? Do I need a new therapist? How can I get past this? Why is this so difficult? Does she care? Blah blah blah.

After a week where I have done a great deal of mental to-ing and fro-ing about what I was going to speak about in tomorrow’s session and struggling to get down to writing some prompts to help me talk about what I need to (we’re still not anywhere close to over the rupture from a few weeks ago) it turns out that most of the angst and ache has been completely unnecessary because I can’t now go to session tomorrow.

My house has been like some kind of vomit factory this weekend #thejoyofkids and I’ve spent a significant amount of time clearing up sick off the bathroom floor and disinfecting everything x100. Fortunately I’ve only been sick a couple of times but am now very reluctant to put anything in my mouth for fear of throwing it back up again.

There’s a bit of an irony there, because at the end of my last post I was wittering on about what my next session might be like. There was the teen acting up wanting to cancel through sheer frustration but also the acknowledgement that the young attach parts needed to go:

It’s unlikely to be anything near to what I need (holding, proximity, emotional attunement and containment) because I won’t tell my therapist what I need because my inner child is so scared right now since the rupture that it’s gone into hiding and I have quickly entered a dissociated state once I’m there… and so there’s a part of me that feels like cancelling….but another part that won’t because there’s that tiny flicker of hope that that 50 minute session will help turn off some of the plugs just for moment and help me recharge my batteries.

As much as I have been anxious about what tomorrow’s session might be like there was also a part of me that desperately wanted to go. The last session we had was difficult (again) I had started with migraine symptoms midway through (having had one earlier in the week). My therapist had asked me if I would like her to try something with her moving her fingers slowly up and down – apparently vertical eye movements can help alleviate symptoms (who knew?!).

She moved from her chair onto a stool which was about half the usual distance from where she usually is. I always feel like she is a million miles away, even though it’s probably less than two metres between our chairs and so her moving closer to me felt massive and my body had a huge response to it.

Part of me loved having her within touching distance and part of me knew that whilst she might be ‘within touching distance’ I still couldn’t touch her. The child parts basically fell apart inside. The desire for physical proximity and holding was so strong that I started crying. I felt so sad. When she’d finished doing the eye thing she moved back to her regular chair and then I went completely numb. I felt like I had been abandoned.

Who would’ve imagined that something as small as moving a metre in the room could have such a profound effect?

I really struggled to pull myself out of my protected silent space. Part of me wanted to ask her to sit back on the other chair and part of me just wanted to die of shame and embarrassment for needing that. I couldn’t tell her what had just happened. I didn’t want to be so exposed and vulnerable because I was still on edge about the previous session…and the therapy break.

I found some kind of inner strength towards the end of the session and asked her if she had been cross with me in that session. I’d been sitting on that question all session! I know, it’s not exactly enormous is it? But I am often frightened of asking questions because I am not sure I really want the answer and in this case it was the little ones who were asking.

I’d felt that the last session had been off. I think it was always going to be tricky coming back after the therapy break and the text debacle/nightmare but it had felt particularly distant and all I could think of was that she was cross with me/the little ones for reaching out to her and expressing so much need.

My therapist’s initial reaction was ‘cross with you? No? Why? When did you feel like that?’ I explained that I had felt there was something off for the whole session. Then she said she wasn’t angry or cross but that she hadn’t liked reading the blog post that she’d read before I had arrived. I said ‘I didn’t think you would’ and we laughed. She explained what she had found difficult in the post and basically said that she didn’t want to read any more posts because she doesn’t need to be ‘masochistic’. So, perhaps that post hit a nerve?!

I asked her why she hadn’t felt able to tell me any of this last week, and she said maybe she’d ‘chickened out’. Which actually made me smile inside. She is human after all! haha. Although that’s just a snippet of the conversation what I will say is that the nature of the conversation felt different to what we’ve had before. I felt like she was really talking to me as ‘her’ not hiding behind the therapist persona.

I came away feeling more optimistic than I have in a while. Like there was something to build on….i.e I needed/wanted to tell her about the issue with proximity and the seating, and the feelings that get evoked about ‘no touch’, the need to work more relationally and directly with the young parts, how disappointed I’ve felt about not getting anywhere with the pebbles/transitional object, and tell her that I’d been to see another therapist to try and help me work out what I needed in therapy and how to get through the rupture. Eeek.

So there we are – some big stuff…and then my children conspired against me and had a sick fest. Whilst they are fine now they won’t be able to go to school until Tuesday – 48 hours clear and all that and so I can’t go to therapy tomorrow even if I wanted to.

So that leaves me with today’s quandary: should I ask for a Skype session tomorrow?

I already text my therapist yesterday morning to tell her I may not be able to make it as that’s her cancellation policy. I literally do not have a clue what to do for the best. We’ve done a Skype session  before and whilst it wasn’t my preferred method of conducting therapy, it wasn’t totally dire either.

I’m torn. I know I was fixed in my adult and didn’t dissociate in the Skype session. And maybe that’s what I need, an untriggered adult conversation about moving forward together. Maybe if we are not in the same space I’ll feel more able to express the concerns I have and the things that have been bothering me?

I’d like to think that’s how it would be, but I am aware that I might just small talk my way through the 50 minutes. Not connect. Feel cut off and distant. And then feel bereft all week and as though the whole thing is a waste of time.

I can’t afford to find myself in that activated/distressed place where the attachment pain is rife and I’m left with it until the next session. I’m not sure how to avoid that eventuality: Skype or cancel the session until next week?

I don’t know what to do for the best. Which part do I listen to? The one that would walk over hot coals to have contact with my therapist, or the one that fears that a Skype session might send everything spiralling? 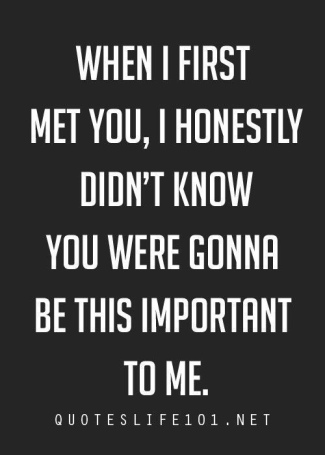