I’m just going to put this out there: 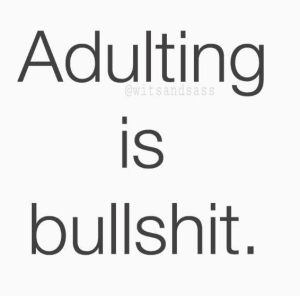 There’s no two ways about it, having to be a responsible adult is really fucking difficult sometimes. Like, err, today for example. Ugh!

I knew it was going to happen. It always does. One of my kids gets sick then the other follows along shortly after. Today was my son’s turn to get the dreaded lurgy.

I posted on Friday how nice it had been spending time with my poorly daughter watching movies on the sofa when she was off sick from school. Today should have been the same, right, only this time with my son? Yeah. It didn’t feel like that this morning at all. Why? Monday is my therapy day.

I was operating on two levels simultaneously this morning:

It was clear as day that my son would not be going to pre-school. Calpol wasn’t going to cut it. He was running a temperature, had a croaky voice, and was complaining of sore throat. He was too ill to go to school but well enough to fight with his sister and generally kick up a storm before it was even 7am! My wife was in meetings all day and couldn’t be at home so I could go to session.

I know I complain a lot about not talking in therapy, or not saying what I need to, or miscommunicating, or whatever- but I at least wanted to be in the chair to have a go at getting it all out rather than having to hold it for another week!

After the last few sessions that have been quite emotional and exposing I really needed to see my therapist today. I’m crap at holding this stuff for myself and the idea of having to wait another week to begin to tackle any of what I have let out was just unbearable. I’m crap with any kind of disruption to the therapy and couldn’t bear the idea that next week would be a write off due to my non-attendance this week.

I was about to send a text to tell her I wasn’t going to make it to session but then decided to ask for a phone/skype/FaceTime session instead. I’m actually not a massive fan of Skype but frankly anything was better than nothing. She agreed and so we were lined up and ready to go at 10:30am. 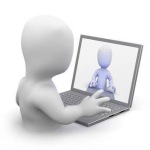 It was a weird session in some ways. I know I communicate better in person….actually, that’s a lie, that should say writing, but given the options available to me today I was willing to give it a go. It was lovely to see her face and connect even if it was through a screen.

I remained firmly in my adult which is just typical when it’s the little ones that have been causing me a lot of upset. It’s hardly surprising, though, as I did have my son wandering around the house, periodically climbing all over me, and randomly coming to show Em his dinosaurs!

It’s funny, she’s never even seen a picture of my son until today, and yet she’s met my daughter many many times. When I was in therapy with Em last time my daughter was a newborn. I literally had my C-section and the moment I was able to drive again started the therapy. My daughter would come to sessions with me so I could feed her etc.

I sometimes I forget when I get nervous or anxious that this woman has sat with me talking whilst I’ve breast-fed and that really there is absolutely nothing to worry about when I am with her.

It was nice to see her interacting with my son in the way that she used to with my daughter. It reminded me of how warm and how safe she is. I had kind of forgotten that side of her somehow.

So even though I didn’t really talk much today about this big issues….in fact it’d be fair to say all I did was moan at her, the session was good. I feel I can survive the week now. I know that she is still there and actually, I think she does actually care. I think there is real strength in this therapeutic relationship.

Let’s please hang onto that til next Monday!

back to my body
Growing Into Myself

Writing through PTSD
Clean and Light

mytwomums.com
All Wit, No Brevity
papercuts and skinned knees

Recovering from anorexia, one bite at a time

Three Men with a blog

Reflections on psychological trauma by an EMDR trauma therapist. All photos/artwork by author.