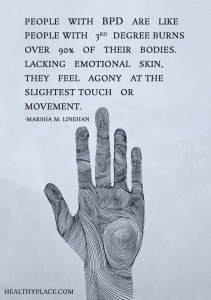 BPD isn’t a new ‘thing’ on my radar, it’s something that’s been circling in the background of my mind (where the cobwebs and half-eaten biscuits are) for about four years now. When I read the descriptors for BPD all that time ago, I was like, ‘Omg that’s so me!’ Rather inconveniently I made this discovery once I had actually finished my period of therapy with Em and so never really thought much about it. But it’s back in my mind, front and centre, at the miniute and so I wanted to have a waffle about it, a bit, before I go to therapy on Monday – stinking cold permitting, of course (thanks kids!).

Christmas break 2016 was an emotional disaster zone for me. Oh but what did you expect?! ha! ‘Tis the season to be jolly’, or rather I feel, more accurately ‘Tis the season for pretending that we all like each other and actually want to spend time with one another whilst re-enacting outdated and weird family dynamics’. But maybe that’s just my family!

I largely survived Christmas day by spending a great deal of time in the kitchen cooking dinner! Don’t get me wrong, the time before my mum and husband arrived was completely wonderful and relaxed. My wife and I were happy despite the 5am wake up call. Our little family unit was full of joy as we slobbed in our onesies.

Christmas morning was all that it should be with small children: smiles, laughter, ripping off wrapping paper fast enough to set a world record.  They had no idea that this one day had resulted in Santa maxing out his credit card and that January would now mean lots of pasta meals!

By Christmas night I felt like I was going to have a breakdown and took myself off to bed to hide, cry, shake, get swallowed up in unexplained misery. I suppose it’s not really surprising that things felt difficult having spent the majority day with my mum playing ‘happy families’ and yet feeling emotionally cut off from her, not getting a hug (not that I want one anymore), and feeling like there is a huge distance between us.

I know I need to let it go and move on but there’s just so much unprocessed hurt in me still and it’s only really coming to light now. My adult gets on well with my mum and can see her for the flawed human she is, but my little ones feel unseen and abandoned just in the way they were 30 years ago by someone they idolise. 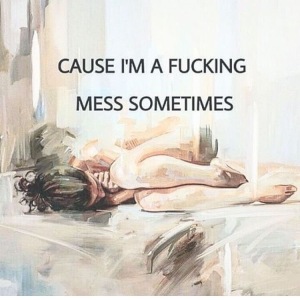 Just to be clear, one of may favourite places to be is my bed but it’s also where I seek refuge. I like sleep and am currently working on about a three year sleep defecit since having my children. I see way too much of 6am and cannot believe that 7am feels like a lie in! As a result of ALWAYS feeling tired and/or emotional I take to my bed like a neurotic heroine from a Victorian novel whenever the opportunity arises, i.e the kids are at school or are in bed.

Suddenly, that evening, as I lay curled up in a ball under the duvet, in a way that hadn’t really happened before, all the little parts made themselves known and caused complete havoc. I was all over the place. I felt so lost, lonely, and uncontained. I was scared. In that moment of abject misery my thoughts went to one place. I wasn’t sad about my mum, instead I was distressed about not having my therapist nearby. Yay. Lovely maternal transference my old pal! ha!

I absolutely longed to see Em and yet at the same time I wanted nothing to do with her. I missed her so much that it physically hurt and yet part of me was raging and hated her. I desperately wanted the break to end and yet part of me couldn’t care less about seeing her again. I needed her but I didn’t want to need her. I craved closeness and proximity but needed to isolate myself and protect myself. I wanted to let her in and yet I didn’t want her to have the power to hurt me. It was an exhausting emotional dance, two partners pushing and pulling against each other rather than working together. I really struggle with this inner conflict and often feel like I am tearing myself in two. 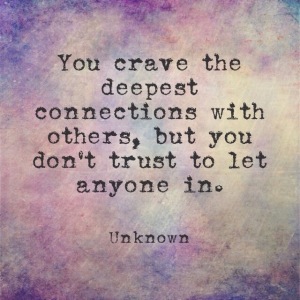 Towards the end of the therapy in 2013 my therapist told me that I struggled with emotional intimacy. Which I thought was funny because I had never really noticed. I think because I feel things so intensely I kind of assumed that emotional intimacy must be part and parcel of that. It wasn’t until I really thought about it that I knew she was completely right. I feel things, I ache, I have huge emotional dialogues…with myself. It all takes place internally.

I care a great deal about people, when I love someone I really love them, but I don’t necessarily show it or really let anyone in. On the outside I can appear cold and stand-offish, particularly if I care about how someone views me. Even my wife says there is a part of me that she just cannot get to, that there’s a part of me that is so heavily defended that she has no idea how to reach it.

I know that my struggle with emotional intimacy stems from being hurt and childhood trauma.  The feeling I have about needing to protect myself and being wary of trusting people hasn’t ever been on a conscious level, I don’t think, it’s my innate survival relational pattern. It’s only now I am able to understand why I am the way I am. I still don’t fully know how to change it but what I do know is that much of it will come from repeatedly playing out things in the therapeutic relationship, until I reach a point where I realise and trust that she isn’t going to deliberately hurt me, abandon me, or make me feel like I am too much.

After the Christmas break, I returned to therapy and the first thing I said as I sat down was, ‘do you think I have BPD?’. I mean seriously, most people would surely have asked, ‘so how was your Christmas?’ or perhaps said something along the lines of ‘it’s really nice to see you again. Christmas was tricky and I have loads I want to talk about’. Yeah, that’s just not me!! I can talk around the edges for ages and then every now and then I just launch straight at it – picture a running dive bomb!

So, my therapist sat for a moment, and then said, ‘Not necessarily. What makes you think that?’ Hmm is that a cop out of not? I don’t know. I talked a lot about how I operate in my relationships and this push/pull thing that goes on in my head, but she never said what she thought when I had finished. I still don’t know what she thinks because I haven’t returned to that question since.

She often says things about how she doesn’t want to pathologise me and that given what’s happened to me how I behave is understandable.  We’ve spoken a lot about my being a ‘highly sensitive person’ and I certainly more than fit the criteria for that: http://hsperson.com/  but I think my behaviour since Christmas would indicate that there’s a strong case to be made for a BPD diagnosis but hey, who knows, I’m a mixed bag of nuts!

Actually, this whole post has come about because I’ve just seen a video on my Facebook feed (see below) and I wonder if the reason my therapist didn’t say ‘yes’ when I asked her about BPD is not because I don’t fit the criteria but rather the label is not always helpful. At the core of it all are significant issues with attachment and trauma. Diagnosis or not it wouldn’t change the therapy and perhaps it is easier to view things from a perspective of having a difficult childhood rather than labelling. I don’t know.

I thought it was an interesting perspective. What do you think?

Starting Over
Starting back

Musing on counselling-related issues in the UK. I am a counsellor/psychotherapist and a client too. As the blog title suggests, my counselling journey began in the client's seat. For information about my counselling and psychotherapy practice see my website: www.erinstevens.co.uk